In 1898, while en route from Leith to Liverpool, the British Princess under the command of Robert Crawford Scott was involved in a collision with an unknown steamer. The steamer sank immediately, and there were no survivors.

Gugliemo Marconi was still developing his apparatus which would allow wireless communication, but in 1898 ships had three options for signalling each other – flags (when visiblity allowed), lanterns (at night), and shouting when all else failed. Approaching each other head-on at night with the sailing vessel making good progress under a following wind, there was little that could have been done to avoid disaster. 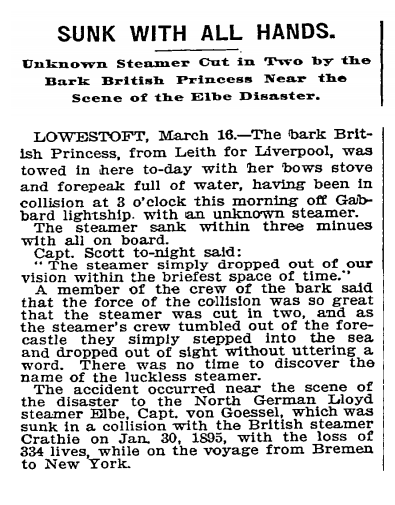 In the days which followed more details emerged. Robert gave a harrowing account of events:

Eleven days later and the identity of the unfortunate steamer was suspected:-

Finally, two and a half weeks after the accident, came confirmation:-

Many thanks to Gary Green and Sandra McKay of Hartlepool Library Services for providing this information.