Prince Rupert, together with another Moran, Galloway vessel Star of Brunswick, arrived at the Chincha Islands on 8 January 1869. Robert Crawford Scott was Master, and George Peter Scott either Second or Third mate.

Loading at the islands took longer than expected. Guano was a valuable commodity and dozens of ships often queued for weeks to take on a cargo. Their was no harbour at the Chinchas, and loading took place from wooden piers built out from the cliffs. The Prince Rupert and Star of Brunswick did not arrive at Callao (the port of Lima, Peru) until 31 May. The vessels were surveyed, bills of lading were signed, and Captain Scott and his counterpart Captain Wedge expected to be on their way. They were prevented from leaving by port officials who claimed that their vessels were overloaded – despite the official surveyor having declared them to be within agreed limits. For sixteen days correspondence flowed back and forth between the captains and their agents. On 18 June 1869 another survey was made of the ships. This time the ships were found to be lighter than previously, but rather than allowing the vessels to leave both Captains were charged with throwing cargo into the sea – a criminal offence.

Both Captains were eventually acquitted. In spite of the second survey showing the ships were even lighter than the first, the surveyors now insisted on more cargo being discharged. Scott and Wedge refused. H.M.S. Zealous was in port, and so they turned to the British navy for assistance. Her officers also found the ships to be lawfully loaded: 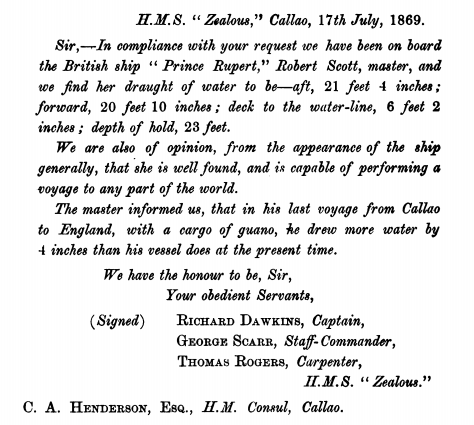 Still the authorities refused to allow the vessels to sail. On 29 October 1869 the ships were surveyed again, this time by officers from the United States Navy. Their findings were exactly the same as the previous, yet still the vessels were detained. A third independent survey was taken on 9 November, this time by a Lloyd’s surveyor and the Dockmaster of Callao. Once again they found nothing improper, and added this warning: 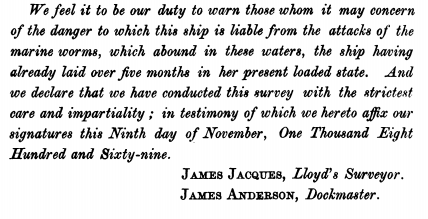