Robert Crawford Scott was born 1 February 1825 in Berwick upon Tweed, Northumberland. He and his twin sister Catherine were the fourth and fifth children of George Scott and Ann Crawford. Sadly Catherine died at birth, but the family eventually grew to seven children including Robert.

The earliest address I have is from the 1841 census. Robert is 15, and the family are living at Walkergate Lane in Berwick: 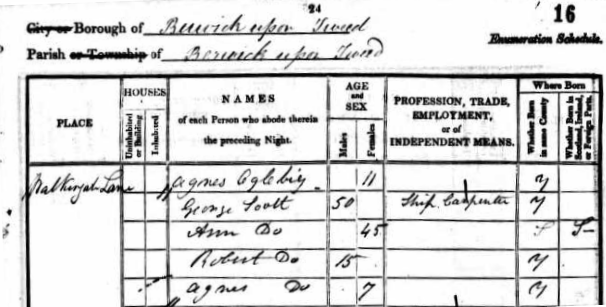 George’s occupation is given as Ship Carpenter – whether working in the shipyard at Berwick or a carpenter on board ship I do not know for certain, but as he appears to be at home for each census from 1841 to 1871 it seems more likely that he was shore based.

In the early part of the 19th century Berwick was a thriving port. Most of the trade was coastal, sending produce from a hinterland which stretched across northern England and southern Scotland. Eggs for London were a large part of this trade, as were salmon (salted or on ice). Speed was important for these perishable goods. A type of boat known as a Berwick Smack, built specifically to do the job, could make London in just 44 hours.

Berwick prospered in the second half of the 18th century, but increased demand for produce in the capital began to outstrip the capacity of her port. Trade moved to Leith as the 19th century began, and by the middle of the 1800s railway mania led to the most lucrative cargoes arriving at their destination in a few hours rather than several days. 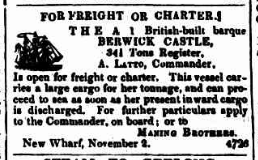 Into this changing world Robert began his four year apprenticeship in May 1842 at the age of seventeen. He first sailed as an apprentice on Berwick Castle, newly built at Gowan’s yard in Berwick. She was a barque, registered as 341 tons. I have no record of the voyages sailed by Robert during his four year apprenticeship, but the vessel seems to have been used both for cargo and emigrants to the antipodes. The ship was lost in 1854.

Robert had a short berth as an AB on Little Aggie, a 64 ton schooner from July 1846. From September to October 1846 he worked aboard the Manchester, a 500 ton steamer coastwise to London.

His next ship, from October 1846 to March 1847 was John Maclellan, registered 589 tons at Liverpool. According to RCS’s Particulars of Service she was engaged in the United States trade. From March 1847 to the next November he was Mate on the Isabel, 130 tons, Liverpool in the Mediterranean trade. 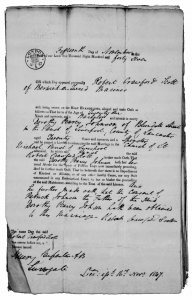 At this point he was five years into his career as a mariner. Between voyages he must have spent some time ashore at Liverpool, for on 15 November 1847 banns were read for his marriage to Dorothy Piercy Johnson, a twenty year old spinster. Her parents were from Berwick though she was born in Liverpool in 1827, and it seems likely that their families had known each other before they moved to the city. As Berwick’s star was fading, Liverpool’s was in the ascendant. People were flocking to Liverpool from all corners – the population had risen from 77,000 in 1801 to 286,000 in 1841. It’s easy to imagine the immigrants from Berwick would gather together with those who shared a common heritage.

Blundell Street where Dorothy lived with her parents is still there, running down the hill to the dock road opposite Queen’s Dock. Some nineteenth century warehouses are still standing, but they date from the 1870s or later, so there is little left to show what the area was like. At the time the Johnsons were living there most of the businesses in the area were related to the docks and shipping – coopers, shipbuilders, sailmakers, a foundry and a brewery. It would have been a busy mix of industry, miserable court housing and likely visiting sailors on a spree. There are numerous public houses and spirit vaults in the area – at least three on the area shown below are called Bunch of Grapes!

In 1847 when Robert and Dorothy married, the Albert Dock had only been open for a year. St George’s Hall was still under construction. Lime Street railway station had been operating for over ten years and was already being rebuilt and expanded. Additional docks were being constructed to the north of the city to accommodate the ever-larger ships which fetched and carried cargoes to all parts of the world. The American author Herman Melville had visited the port as a young sailor and later described the scene:

I made sundry excursions to the neighbouring docks, for I never tired of admiring them. Previous to this, having only seen the miserable wooden wharves, and slip-shod, shambling piers of New York, the sight of these mighty docks filled my young mind with wonder and delight…
In Liverpool, I beheld long China walls of masonry; vast piers of stone; and a succession of granite-rimmed docks, completely inclosed, and many of them communicating, which almost recalled to mind the great American chain of lakes: Ontario, Erie, St. Clair, Huron, Michigan, and Superior. The extent and solidity of these structures, seemed equal to what I had read of the old Pyramids of Egypt… For miles you may walk along that river-side, passing dock after dock, like a chain of immense fortresses:—Prince’s, George’s, Salt-House, Clarence, Brunswick, Trafalgar, King’s, Queen’s, and many more

Dorothy and Robert didn’t have long together after the wedding – he was back at sea in December 1847 for a three month stint as Mate on the Formby, a 180 ton coaster registered at Whitby. February to August 1848 he was Second Mate on Safeguard, 290 tons. On his Particulars he notes they sailed to Brazil. Another spell to and from the Mediterranean aboard Porcupine took him to November 1849. On 16 November 1849, when Robert was 24 and Dorothy 22, their first child George Peter Scott was born. The family’s address was still 10 Blundell Street.

Christmas was spent ashore with wife and new-born, but on 30 January 1850 he was back at sea again on his largest vessel yet – the 627 ton Queenstown, sailing to the United States. Robert was Mate on Queenstown for exactly one year. In 1850 the Board of Trade made certification for ships’ officers compulsory, so on 11 November 1850 he applied for his Mate’s certificate, number 66,429, at Liverpool. For men like Robert who could show long service as a Mate no examinations were necessary. The certificate was issued at Cork 1 February 1851. 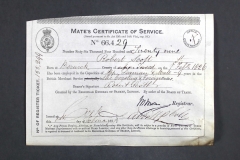 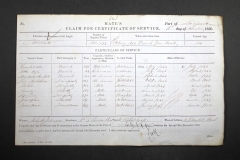 From February 1851 until February 1852 he was Mate on Marcia, then from March 1852 until August of that year he was Mate on Lydia. Robert Crawford Scott, his second son, was born 25 May 1852. Home address on the baptism record was 42 Bridgewater Street, just a couple of hundred yards from their previous address.

Robert’s next berth from 24 August 1852 – 22 June 1853 was as Mate on the Briton.I don’t know which trade she plied, but as a Fleetwood registered vessel perhaps he was not away for such long periods as on his previous voyages. Whatever experiences he had, he clearly felt ready to move up a rank, and in June 1853 he sat and passed his Master’s examination. 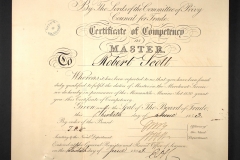 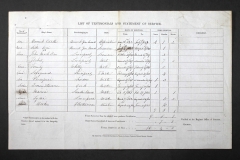 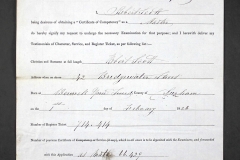 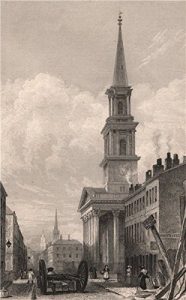 The statement of service on his application is my main source of information about the ships Robert sailed in, so after this date I am reliant on official records and occasional mentions in newspapers.

From the baptism register we know his third child, Agnes Mary Scott, was born 22 December 1854. She was baptised on 7 January at the church where her parents married. Two and a half years later on 21 June 1857 she gained a sister, Margaret. There was a five year gap before their fifth child James Harrison Scott was born 23 June 1862. By now the family had moved to 140 Bedford Street, about a mile further out of town and away from the hustle of the docks. Robert was 37, oldest son George 12, Robert 10, Agnes 7 and Margaret 5. Tragically, on 26 August 1862, their mother died aged just 35. There was a brief notice in the Liverpool Mercury:

On 9 November 1865, Robert was Master of Prince Rupert. She made the journey from Liverpool to Melbourne in three and a half months, carrying thirty-two passengers in steerage and six first class. It was a stormy passage, as the Hobart Mercury reported:

Two years later, in 1868,  Prince Rupert was now engaged in the guano trade. Also aboard was oldest son George, third mate. The voyage took considerably longer than expected – they were detained by the Peruvian Government!