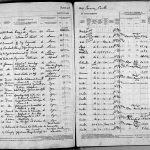 James Harrison Scott joined the sailing vessel Conway Castle at Hamburg on 23rd February 1914, five months before the start of the Great War and four months before his fifty-second birthday. The voyage was to be for a period not exceeding three years, and was initially to Santos in Brazil. Her Master was John Williams, aged 46, of Port Madoc. James Harrison Scott was first mate, on a wage of £10/- per month. Also aboard were a second mate, steward, cook, carpenter, sailmaker, nineteen able-bodied seamen and seven apprentices. One of the apprentices was a George Samuel Anakin, aged seventeen, of Liverpool. His uncle owned the potato shop on Lodge Lane; his father owned the branch of Anakin’s at 631 Smithdown Road.

The voyage across the Atlantic usually took around six weeks. On 3rd June 1914

she left Santos headed for Newcastle, New South Wales, where she arrived on 30th July. I’m unsure of her cargo, but as coffee accounted for over 50% of Brazil’s exports at the time that would be a good bet. The voyage seems to have been uneventful for the ship, but a somewhat unlucky one for JHS. Hopefully he wasn’t too hurt by his fall down the hold. There was much more drama was to come.

The next record I have for Conway Castle is of her leaving Newcastle 11th September 1914, and arriving at Valparaiso on 28th November. There she loaded a cargo of barley and left Chile bound for Queenstown (Cork) and eventually Liverpool. By this time of course Britain was at war with Germany, but Chile was officially neutral. 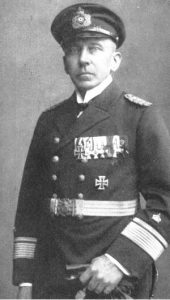 Fregattenkapitän Fritz Lüdecke was captain of the cruiser Dresden in the Imperial German Navy. His ship was part of Admiral von Spee’s fleet, which had recently engaged with the Royal Navy at the Falkland Islands. The Germans had been roundly defeated – von Spee himself was dead, and of the eight ships in his squadron only the Dresden had escaped. She was a fast ship with modern turbine engines and could maintain a top speed of over 25 knots, but the battle and ensuing chase had damaged her boilers. On 9th December 1914, low on fuel and supplies, she rounded Cape Horn and entered the Pacific.

After putting in at Punta Arenas to take on more coal, and aware that if he returned to the Atlantic with his damaged boilers he would be unable to outrun the Royal Navy, Kapitän Lüdecke decided to cross the Pacific and embark on a career raiding commercial shipping. There was some trouble with the Chilean authorities, but a network of German emigrés with local knowledge of the largely uncharted coastline helped Dresden resupply and evade her pursuers. She took on another 1600 tons of coal on 19th January, and on 14th February 1915 Dresden left the islands off the South American coast for the South Pacific.

The Conway Castle was ten days out of Valparaiso on 27th February 1915. At latitude 37° 21′ S, longitude 81° 58′ W a steamer was sighted in the distance, and as she approached at around three miles distance she began signalling for the Conway Castle to stop. It was the Dresden. A boarding party was dispatched and had soon informed Captain Williams that his ship had been seized. The boarding party transferred all of the ship’s stores and provisions to their boat, and ordered the crew to row in their own boat to the Dresden. Once aboard, the Conway Castle was scuttled with explosive charges. 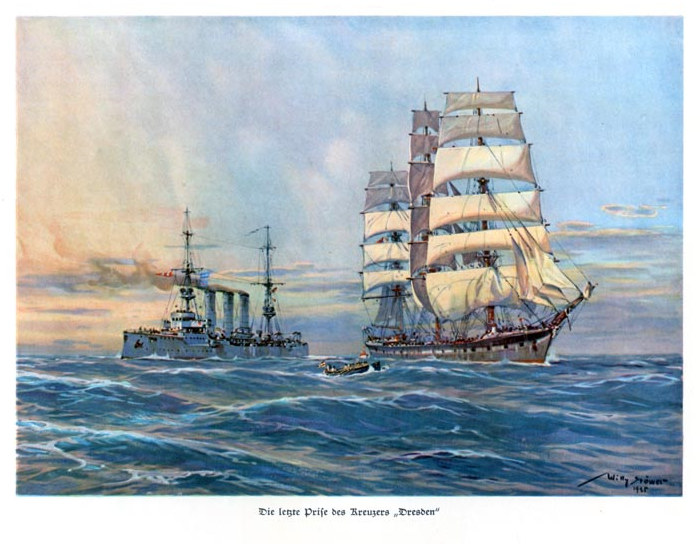 On 7th March the Dresden hailed a Peruvian barque, the Lorton, and the captives were transferred to her. They were landed at Talcahuano and arrived safely at Valparaiso five days later.
This text, originally in Spanish and translated by Google, is from a book by Chilean writer Maria Teresa Parker de Bassi. I have no idea whether it is a fictionalised account.

On February 27th, we saw a sailboat coming in our direction. We slowly approached him, ordering him to stop. When it was visited, it was found to be English, it came from Australia and carried 2,500 tons of barley to Valparaiso. His name was “Conway Castle”. We transported his crew to our ship and with explosives and grenades we sank him, making him disappear into the depths with all his cargo. We were disappointed that he did not have many supplies, not coal, but we were glad to hurt our enemies. This is the war … at night we had a concert on the deck.
On March 4 we spotted another sailboat, which was identified as the “Loston” flag of Peru. The captain was sympathizing with the Germans, so he agreed to take the crew of “Conway Castle” to Valparaiso. We said goodbye to our five-day visits with great cheers and demonstrations of affection. We were friends despite the loss of his ship and our warlike antagonism.

This next quote is from an original source, the Dane Christian Stöckler who was a stoker on the Dresden. Many thanks to René Rasmussen for the translation.

A week after we put to sea, action began. A beautiful, white, English Full Rigger, Conway Castle, had come in our way. It was stopped with a shot across the bows, her crew taken on board the Dresden and the beautiful ship sunk with a quick shot. It sank with all sails up before we had come very far.
Its captain swore and scolded, for in every port the Englishmen had spread the rumour, that Dresden had been sunk in the Falklands, and that the sea was completely liberated from the German warships.
A few days later we stopped at a dirty Peruvian steamer, whose crew ran around on the deck like flies in a bottle, when we went alongside their ship.
They thought they saw a phantom ship, for they too had received the news that Dresden was lying on the bottom of the sea. They cried and yelled during maneuvers, and so did the pig, they had on board. We didn’t do the neutral ship any harm, but only sent the crew of the Conway Castle on board.
We had all grown fond of the captured Englishmen, and we parted in a nice and polite manner. Before they went in the boats, they cheered a hearty hooray for Dresden’s crew, and we responded for our guests, who had lost a beautiful ship, but won a strange experience.

Shortly after the capture of the Conway Castle, Dresden was herself scuttled by her own crew. She had been run to ground by HMS Orada, HMS Kent and HMS Glasgow, adversaries from the Falklands which had been hunting the Dresden since that battle. The British ships, disregarding Chilean neutrality, opened fire. Dresden returned fire, but she was hopelessly outgunned. Damaged by the shelling with fires burning  Lüdecke gave the order to hoist a white flag. Whilst negotiating with the British Commander, the crew detonated charges which scuttled the Dresden. She still lies off the coast of Robinson Crusoe Island, but in 2001 a team of divers explored the wreck. Among the artefacts brought to the surface was a large brass bell, taken from the Conway Castle.

Not sure if this is the same pig mentioned during the encounter with the Lorton – would the Germans have taken her from the Peruvian vessel? – but when the Dresden sank the crew of HMS Glasgow recovered a pig from the water and kept it as a mascot. They named it Tirpitz. 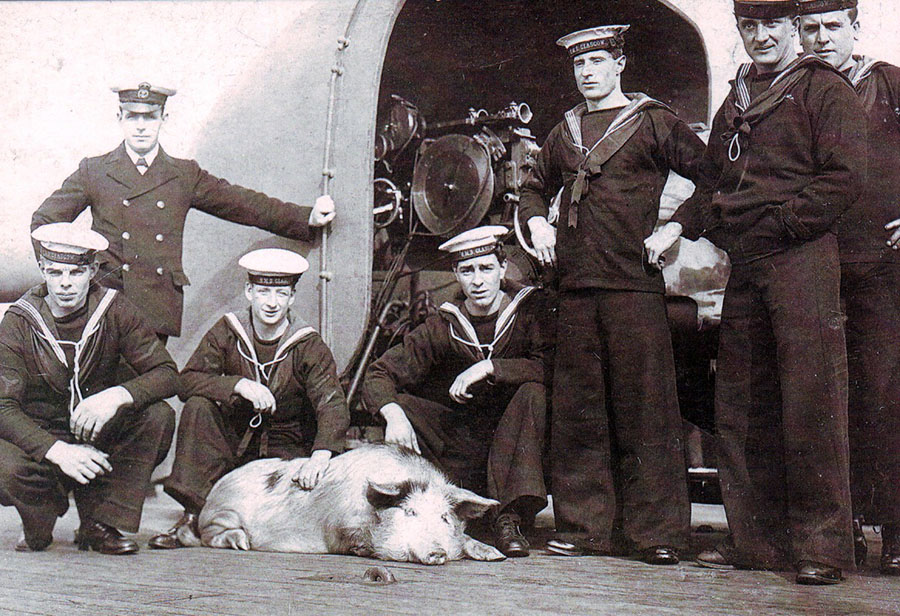 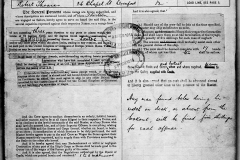 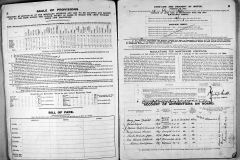 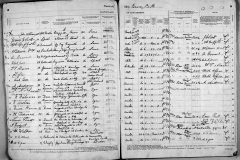 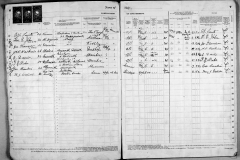 Conway Castle crew agreement. Several of the original crew are German, Russian and Danish. They were no longer on board when Conway Castle was captured by the Dresden, and are listed as ‘detained by authorities’ at Newcastle NSW. 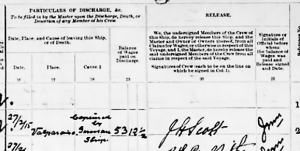