James Harrison Scott was born on 23 June 1862. He was Robert Crawford and Dorothy Piercy’s fifth child – his siblings were George (12), Robert (10), Agnes (8) and Margaret (5). The family were living at 140 Bedford Street in the area of Liverpool known at the time as the township of Harrington. The street is still there although it was renamed Beaufort Street in the 1860s, and none of the original houses survive. In the nineteenth century it was lined with three-storey terraces. To the rear was court housing, where whole families were forced to live in a single room and water often came from a communal pump outside. His father was usually away at sea, of course – in the 1861 census taken the year before James was born, Robert is not present and Dorothy’s occupation is given as ‘Captain’s wife’.

The 77-year-old Sarah Johnson listed as a visitor was Dorothy’s mother.

James was baptised at the church of St Michael, Pitt Street on 27 July 1862.

When he was just one month old, in August 1862, his mother died. 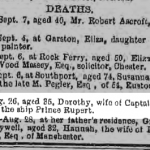 His father was at sea, probably as master of the Prince Rupert. By the time of the next census in 1871 James is nine years old and living at 53 Bridgewater Street. Margaret Harrison, his maternal aunt, is head of household. His 86 year old grandmother is living there too, but none of the other residents at that address are related. His sister Margaret had died 12 October 1870, Agnes was now 17 and living with her Grandparents George and Ann in Berwick. Oldest brother George was 21 and serving on Prince Rupert with his father, while Robert was 18 and an apprentice seaman on the same ship.

Just five years later, at the age of 13, James Harrison Scott was indentured as an apprentice. He was bound to the firm Moran Galloway & Co. of Liverpool on 18 September 1876.

His home for the next six years was the sailing vessel Prince Umberto, which had been built three years previously in St John, New Brunswick. Many British ships were being built in Canada by this time – there was no space on the water front at Liverpool any more, and Canada had endless forests of tall, straight trees to be used for spars and masts. An Australian newspaper reported on her arrival at Melbourne the previous year:

She is a wooden vessel, and belongs to a class of merchantmen which are still held in favour, even in these days when iron clippers abound, and are supposed to carry all before them. The Prince Umberto was built at St. John’s, N.B., at Dunlop’s yard, for Messrs. Moran, Galloway, and Co., of Liverpool, and she has been expensively constructed, the best timber procurable being employed, and added to this, she is copper fastened to a height of 23ft. She measures some 250ft. in length, with proportionate beam and depth of hold, and her register is given as 1400 tons. Her freeboard shows plenty of shear, with a good spring forward, and the ship altogether looks as if she would live through any weather….On this voyage she is freighted chiefly with four items – lumber, iron, slates, and salt, the second item comprising no fewer than 1,968 rails. Captain Robert Scott, who was last here in the Prince Rupert, has command of the Prince Umberto
The Argus (Melbourne) Monday 24 May 1875 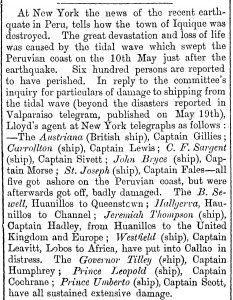 Setting out across the ocean at thirteen years of age would be a daunting prospect, but James was not all alone – his father Robert Crawford Scott was the Captain. On October 16 1876 they sailed from Liverpool on James’ first deep sea voyage, bound for Rio de Janeiro. It was not going to be a gentle introduction to life before the mast. On 26 March 1877 they arrived Callao (Peru), from Rio. On 9 May, while waiting to load her cargo, the ship was one of many which ‘sustained extensive damage’  when she was hit by the tsunami which followed the Iquique earthquake. The wave was reported to be up to 10 metres high and caused havoc along the Peru / Chile coast. Its effects were felt across the Pacific, with deaths also reported in Hawaii and Japan. The town of Iquique was devastated, and the Tarapacá and Antofagasta Regions suffered serious damage.

Repairs to Prince Umberto took a long time as she did not leave Callao until 2 December 1877, for the guano fields of Pabellón de Pica 50 miles south of Iquique in Chile.

On 21 February 1878 she was still at Pabellón de Pica, an arid dusty place where the Atacama desert meets the Pacific Ocean. At last, by 11 June 1878 she was under way. She was spoken to by another vessel at 33 degrees north, longitude not recorded, on her way to Queenstown in Ireland with a hold full of guano. On June 30 1878 Prince Umberto was finally within reach of home when they arrived at Belfast. More than likely she called at Liverpool after this epic voyage; on 25 October 1878 his brother Robert joined the ship as Mate. James’ first trip had lasted about two years, but there was little rest for the crew as by 6 November 1878 they were back again at the desolate shore of Pabellón de Pica.

Prince Umberto‘s next voyages have eluded me, but on 6 May 1879 we pick up the trail again – she left Liverpool for Calcutta, still under Captain Scott. She left India on 19 November 1879, arriving at Gravesend on 2 April 1880. The next day Robert Crawford Scott (junior) was discharged from the ship. He took his Master’s examination in Liverpool and won his ticket on 27 May 1880.

The Boston Post reports that Gravesend was cleared 6 May 1880. Captain Scott (senior) again steered his ship for the open sea, this time bound for New York. The same edition of that newspaper also records that on the same day the Lucile, under the command of oldest brother George Peter Scott, arrived at Liverpool from Portland. On 27 May 1880 Prince Umberto must have been off Newfoundland as she reported several large icebergs. The shipping intelligence for 15 December 1880 tells us that the ship was under a new Master named Baillie – Robert Crawford senior must have got a new berth. She left Calcutta on 13 April 1881 bound for New York, and stopped off at St Helena on 1 July 1881.

James Harrison Scott’s time was served in September 1882. He spent two more months aboard Prince Umberto as an able-bodied seaman, now receiving a wage for his efforts, before being discharged on 30 November 1882. By now he had travelled countless thousands of miles, lived through a tsunami, visited ports in Brazil, Chile, Peru, India and the United States, known hardship and doubtlessly good times with stout companions. He was still only twenty years old.

Some of the recorded voyages of JHS as an apprentice